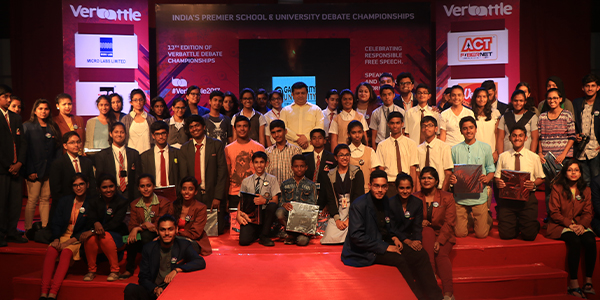 The National Level Competition of Verbattle, with its unique debate format was held for the Academic Years 2018-19 & 2019-20 in Bengaluru. The competition will be a league tournament at the first level, with each team having to compete in not fewer than five debates and up to a maximum of seven debates in case of a tie.

School students in the age group of 12 to 16 years also studying in a class from 7th to 10th. (All other relevant rules)

The registered teams will debate with two other unique teams in each debate.

Likewise there will be four to six debates depending on the number of teams participating.

The opposing teams will be randomly selected by permutation and combination.

The debate statements for the League will be announced on the 15th of January, 2019.

The debate statements for National Skirmish will be announced on 19th January, 2019.

The debate statements for National Combat will be announced the previous night at 9pm.

The debate statements for National Confrontation will be announced 3 hours before the competition.

The National Championship Face Off will be done according to the usual format.

The fee of Rs 3200 for outstation team includes :

- Travel from and to the airport/railway station/bus stand in Bengaluru on scheduled dates at stipulated timings.

Accommodation will be provided in some comfortable facility near the campus.

For students from Bangalore Schools - Coffee/Tea Lunch and Evening Snack.

For Resident Teams : Breakfast, Tea during break, Lunch, Evening Snack and Dinner. Menu will be announced on 17th January.

Pick up and drop to and fro between Accommodation and Venue for all resident teams.

A tour of the city will be organized for interested students on one of the evenings.

Note : Please register before January 18th so you do not face any inconvenience with scheduling, food and accommodation.